Ernest Burke, born June 26, 1924, was the youngest child of Clarence (b. 1890) and Teresa Mitchell Burke (b. 1896) of Perryville, Maryland. His siblings included Clarence (b. 1910), William (b. 1912), Estella (b. 1921), and Gertrude (b. 1922). At some point, the family relocated to Havre de Grace, but eventually became scattered, as both parents died when Ernest was very young. Beginning at the age of nine or ten, Ernie Burke lived with Mr. and Mrs. Maynard, a kindly French-Canadian family in Iberville, Canada.

Years later Ernest provided an explanation of how he moved to Canada. According to Burke, the Maynards had seen him working, chopping wood, and performing other odd jobs to care for himself in Havre de Grace. They saw his strength and ambition, even as a young child and determined to give him a proper home. Mr. Maynard may have had a connection to the Conowingo Dam, constructed and first put into operation during 1927-29.

At the outbreak of World War II, 18-year-old Burke returned to Maryland to enlist in the US Marine Corps. As one of the Corps’ first black Marines, he fought with his segregated unit in the Pacific Theatre, earning a medal as a Sharp Shooter. When he received an honorable discharge in 1946, his papers referenced his commander’s regard for his excellent character.

An Introduction to Baseball

Ernest Burke began playing serious baseball as a member of the Marine Baseball team while stationed in Hawaii. A “natural” all-around athlete whose team won the Pacific Championship, he played against Johnny Wrigley, who suggested Ernest should consider the Negro Leagues after the service. After his discharge, Burke contacted the Baltimore Elite Giants, a storied Black team that played at Bugle Field in East Baltimore.

In 1947, the 23-year-old veteran joined the team as a walk-on pitcher. In 1948, when he compiled a record of 4-1. Among Burke’s teammates were Junior Gilliam and Joe Black, future Rookies of the year of the Brooklyn Dodgers. Burke played for the Elites for two years, and in South America in the off seasons. In 1949 he joined the Poughkeepsie-Kingston team in Western New York as a pitcher, outfielder and third baseman. In 1950 and 1951 the left-handed hitter/right-handed pitcher played for St. Jean in the Canadian Provincial League, hitting .308 and .258 and sporting a pitching record of 15-3 and 8-8.

A man of many abilities

As a community advocate, he helped orchestrate visits of the Elites to Havre de Grace, where they played local teams. After baseball, Ernest Burke returned to Maryland, working twenty years as a heavy equipment tester for Knox Construction in Baltimore. He took early retirement from the firm to devote himself to the care of grandson Jamal, who had been diagnosed with juvenile diabetes. In his fifties, Burke turned to the sport of tennis and because a professional instructor teaching in clubs in the metropolitan area. Burke also served as a motivational speaker at schools and colleges throughout the region, receiving numerous awards, and becoming the subject of TV appearances and newspaper and magazine articles. Despite his accomplishments, Ernest maintained “what I loved most is the hundreds of letters I have received from young people telling me how much they have appreciated learning about the Negro Leagues.”

By Roxann Redd-Wallace with Camay Murphy

Quotes are from Steve Buckman’s interview with Ernest Burke on November 24, 1998. 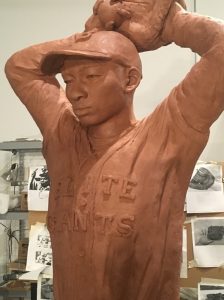 The Ernest Burke Memorial Statue has been commissioned and is being created by Austen Brantley, an African American sculptor based in Detroit, Michigan.

The statue will be installed in Millard Tydings Park in Havre de Grace, and will be dedicated on June, 26th, 2021 at 1:00 p.m. All are welcome.

Those wishing to financially contribute to the project can do so by sending a tax-deductible contribution to:

Fundraising for a memorial statue begins

City of Havre de Grace pledges support to the project

By Roxann Redd-Wallace with Camay Murphy