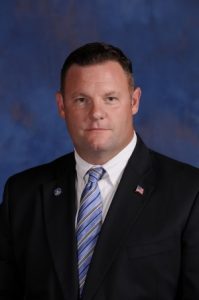 Bill Martin was first elected Mayor of the City of Havre de Grace in May 2015. He had previously served seven years on the Havre de Grace City Council, leading as Council President for three of those years.

Key accomplishments during his three terms as Mayor include: the completion and dedication of Veterans Park, the uplighting in the downtown area, an increase in tourism and events in the City, and the balancing of the water and sewer fund.

Bill has been a resident of Havre de Grace since 1992, following his parents’ relocation to the area as they expanded their antique postcard business. He graduated with a B.A. in U.S. History and Secondary Education from Salisbury State University in 1997. Bill continued his studies with a Master’s of Science degree in Education (2005) and 30 plus graduate credits in Education (2007) through Walden University. Bill has used this education in his daily life as an 8th grade U.S. History teacher at Aberdeen Middle School, where he has taught for the past twenty-two years. His wife, Taryn, also teaches at Aberdeen Middle School.

Bill and Taryn live in Grace Harbour with their three children: Devon, Molly, and Will.

Bill is a member of Susquehanna Lodge #130 of Ancient Free and Accepted Masons. He is also an active hockey player, playing weekly with the Nordiques at Ice World in Abingdon.

“My vision is for Havre de Grace to remain a great place to raise my kids. That it is the type of community that is safe, healthy, financially sound, and civically minded. I will work my hardest to uphold and preserve these qualities for our city. Finally, I would hope that as we look towards the promise of the future, we always keep a watchful eye on our treasured past.”